The first edition of LPP’s “Wyprawka dla pierwszaka” [“School starter kit for first-graders”] programme in Trzebownisko municipality has come to an end. As part of the initiative implemented by the Polish clothing manufacturer in cooperation with local authorities, students in the first grades of primary school received sets of school accessories and gifts. The project is yet another element of the Gdańsk-based company’s efforts to benefit residents of the region, where a new warehouse facility for e-commerce sales, managed by LPP Logistics, will soon be officially opened.

As part of the first edition of LPP’s “Wyprawka dla pierwszaka” programme in the Trzebownisko municipality, gift sets were granted to over 300 students starting school in local elementary schools. They received colorful sets that included backpacks, pens, pencil cases, crayons and trunks for school supplies. The packages, donated by the Polish apparel company, were presented to the children during first-graders’ swearing-in ceremonies held in September and October at nine establishments in the municipality. In addition to students, their parents and teachers, the meetings were also attended by representatives of the local government, and LPP.

–The very first school experiences are an important time on the path of development of every young person, so I’m glad that this year we were able to make this moment more pleasant for children and, thanks to the support of LPP, donate school starter kits, which will certainly come in handy when fulfilling daily school duties. Seeing the positive impact of the company’s presence on the lives of the residents of our municipality, we hope that the upcoming launch of the company’s new warehouse in Jasionka will be an impulse for our further fruitful cooperation, not only in the business sphere – says Sławomir Porada, Deputy Head of Trzebownisko municipality.

As a family business, LPP pays special attention to relations with the local community where it operates. Therefore, actively participating in the life of the region, in cooperation with the Municipality, it undertakes numerous initiatives, especially aimed at its youngest residents.

– We are pleased that, as part of the first edition of “Wyprawka dla pierwszaka” project in Trzebownisko municipality, we were able to support students by providing them with gift sets that will be useful at school, but also make the start of their education more enjoyable. We know how important the time of learning is in the life of a young person, so we wanted the moment of official acceptance into the ranks of students to be recorded in the memory of the first-graders with pleasant associations. We are grateful that we could accompany the children in such a solemn moment and wish them much success and joy in taking on new challenges – comments Sebastian Sołtys, vice-president of LPP Logistics.

In addition to “Wyprawka dla pierwszaka”, the company also funded scholarships for primary school children for the first time this year. In response to the needs of local educational institutions, the company also made a commitment to implement the School Daycare Support Programme, in terms of supplementing educational infrastructure and organizing additional extra-curricular activities. As part of the pilot, the project has been extended to the Primary School in Jasionka.

LPP Group’s social involvement in the region is the result of cooperation with the local government, kicked off in June this year, related to the construction of a new e-commerce logistics facility in Trzebownisko municipality. It will be operated by LPP Logistics, established earlier this year and responsible for managing the Polish group’s supply and distribution network, currently comprising warehouse facilities with a total area of nearly 400,000 square meters. The company also provides comprehensive and modern warehousing, freight and shipping services. 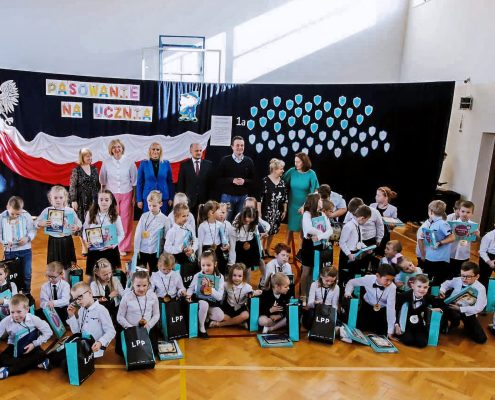 LPP is a Polish family business and one of the fastest growing clothing companies in the region of Central and Eastern Europe. For 30 years, it has been successfully operating in Poland and abroad, offering its collections in such prestigious capitals as London, Helsinki or Tel Aviv. LPP SA manages five fashion brands: Reserved, Cropp, House, Mohito, and Sinsay, whose offer is available today in stationary and online stores in nearly 40 markets worldwide. The company has a chain of over 1700 stores with the total area of 1.4 million m2 and distributes clothing and accessories to 3 continents every year. LPP also plays an important role as it employs over 24 thousand people in its offices and sales structures in Poland, Europe, Asia, and Africa. The company is listed on the Warsaw Stock Exchange in the WIG20 index and belongs to the prestigious MSCI Poland index.